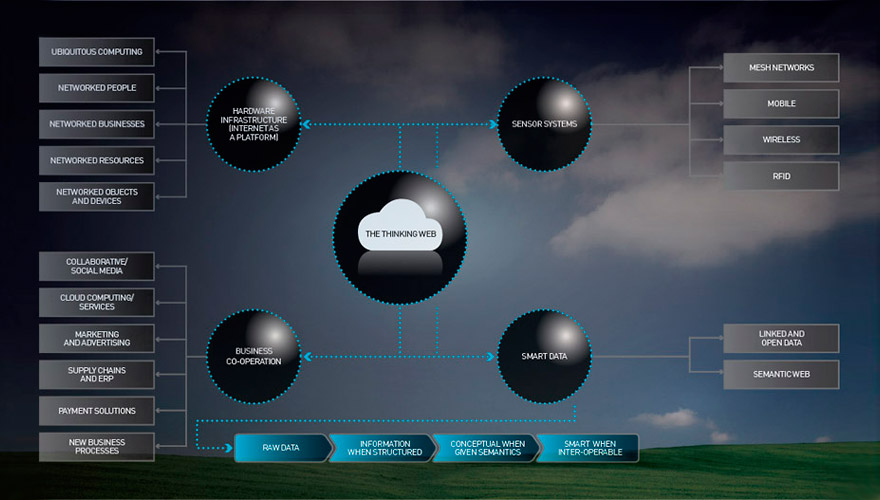 ‘More copious soon the teat-pressed torrents flow.’ So said Charge Cindy, a cow from Buttermine Farms, Ontario, while giving 20.2-kilograms of milk on June 4 at 5.25am. If Virgil’s Georgics III seems extraordinarily eloquent for a cow, add to that the fact that she didn’t just say it: she tweeted it over the internet.

Charge Cindy was wired to the web by a team at the University of Waterloo, Ontario, Canada, which is communicating the movements – the meals, milk yields, hatches, matches and dispatches – of 12 favourite cows on Buttermine. Each has a radio-frequency identification (RFID) tag embedded in it, and the farm is equipped with sensors able to read them. As the cows move around the farm, their actions are translated into predefined tweets, generating a stream of data. What’s more, this data is collected by systems that are able to interpret them and translate the knowledge into actions.

So if Charge Cindy approaches the electronic milking shed tweeting: ‘Come on robot, let me in!’ before she’s ready to be milked, the shed doors don’t open and she’ll tweet: ‘Tried to get into the pen. No such luck.’ Buttermine knows whether its cows are being milked, or are feeding or grazing. More than that, it gets a sense of how its cows are feeling. What could you do if you knew where all your suppliers (or customers) were right now and how they were feeling?

Welcome to the future of the internet: the thinking web.
Mobile sensors, screen-based devices and objects will communicate via the common platform of the web, exchanging smart data through business processes. There are key technological ideas here that you will be hearing much more about over the next decade as the thinking web evolves the semantic web, the internet of things, open data, linked data, the real-time web and augmented reality, among many others.

The internet of things
Buttermine’s cows are the advance guard in the emergence of one part of the future of the internet, or ‘the thinking web’: the internet of things. This is what you get when you connect and track real-world objects through time and space – cows, juice cartons, mobile phones, cars, whatever, wherever, whenever.

The implications for business are mind-blowing. Walmart has been pushing its suppliers to chip all their products at the pallet level since 2004. In that year, Erwin De Spiegeleire, chief operating officer of EAN International (now known as GS1), which is responsible for the world’s bar codes, calculated that Walmart’s savings could be $8.35 billion annually, with $6.7 billion alone saved in reduced manual-scanning costs. That is small bikkies compared to what improved data analysis and interconnectedness of systems will mean in years to come.

Procter & Gamble thinks it will increase sales by $1.2 billion a year through RFID technology by reducing the incidences of out-of-stock items in stores. Retailer Marks & Spencer has been using item-level RFID tags for more than three years and reports that it now takes a mere five seconds to receive data from 50 containers, an 85 percent reduction in the time it takes to scan bar codes.

The information nervous system
Companies have been busy building information-technology nervous systems for three decades. Until now, enterprise resource planning (ERP) systems have been exceedingly good at managing things that stand still, such as plant and equipment. When you connect these systems to the internet and via the internet to other systems, you have a whole new beast. Just-in-time inventory management becomes possible not just at factory level but at shelf level, too.

What IBM calls ‘A Smarter Planet’ is part of this emergent trend. IBM sees its own sensors, RFID tags and cloud services for real-time supply-chain tracking as a major business opportunity – and they’re selling it vocally to give the idea traction in the marketplace. Sensors are being deployed on highways and supermarket shelves, and in poultry products, art galleries and white goods.

As the unit cost of volume-purchased RFID tags has plummeted from US$1.30 in 2001 to between seven and 15 cents today, it becomes more viable to put them into everyday objects.

Flowing from this are the opportunities to interconnect those systems and make sense of the information they share. The insider intelligence that can be gained as a consequence of all that information is a bottomless goldmine for companies such as IBM, which calls it business analytics and optimisation.

So what needs to be in place to make sense of all the information that’s coming in from these instruments and systems? And how can it be turned into real-time business operations?

A semantic solution
The main way to achieve this is to add layers of meaning to the raw data being collected by this unprecedented proliferation of chips, mobile devices and sensors. It is one thing to collect data about where your cows are and the last time they got milked; it’s quite another thing to know what this means in terms of tomorrow’s milk volume and the number of trucks that will be needed to carry it.

The layer of meaning that is placed upon a set of data is known as its semantics. This layer is essential for interoperability between the business systems of one organisation and another. This is a part of what Tim Berners-Lee, the inventor of the World Wide Web, dubbed ‘the semantic web’. And it underlies his latest quest in that direction: the Linked Open Data Movement, which encourages companies, governments and individuals to put their semantically structured data online to see how its astonishing potential will get unleashed.

Way back in 1999, Berners-Lee said:  ‘I have a dream for the web [in which computers] become capable of analysing all the data on the web – the content, links, and transactions between people and computers. A ‘Semantic Web’, which should make this possible, has yet to emerge, but when it does, the day-to-day mechanisms of trade, bureaucracy and our daily lives will be handled by machines talking to machines. The ‘intelligent agents’ people have touted for ages will finally materialise.’

Indeed, they are. Take, for instance, your local shopping centre. Data shows that there is always a surge in custom at 1pm on a Saturday, when school sport finishes, except when there has been more than 200 millimetres of rain in the past week, because that is when sport is cancelled. So what happens when you connect the inventory system of the food court’s restaurants to data from the meteorology office? Food wastage plummets because the restaurateurs can predict levels of demand much more accurately.

It does not take much imagination to see the immense possibilities here, and the ways in which our business and personal lives could change as a consequence. These solutions already exist. It’s just a matter of distributing this sensor-monitored ‘thinking web’ more widely into the present.

This article was originally written for Business21C, the University of Technology Sydney’s Business School brand, with my colleague Mike Hanley. 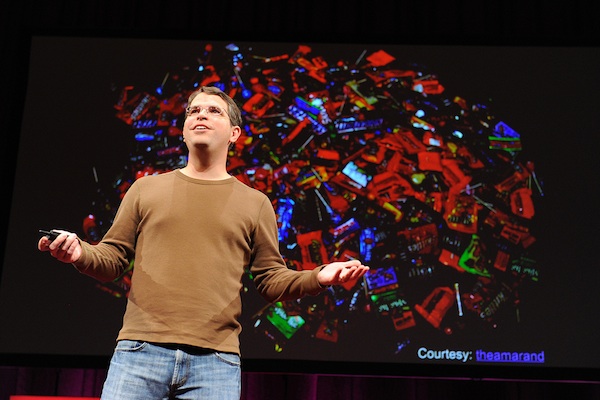 An interview with Google’s Matt Cutts